alt_text_at_your_service
reply
James Cameron's Terminator 3 was the REALLY prophetic one. That's why Skynet sent a robot back to the 1990s to prevent him from ever making it, ultimately handing the franchise over to other directors. 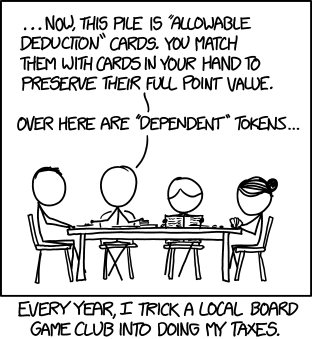 Lythimus
reply
I feel this way about the 19xx board game series. At some point it's just too complex and becomes work.

alt_text_bot
reply
Yes, it took a lot of work to make the cards and pieces, but it's worth it--the players are way more thorough than the tax prep people ever were.

I was going to write a post on how trolls aren’t the fundamental problem with the patent system but Timothy Lee has it covered:

A modern example is Microsoft, which has more than 40,000 patents and reportedly earns billions of dollars per year in patent licensing revenues from companies selling Android phones. That’s not because Google was caught copying Microsoft’s Windows Phone software (which has never been very popular with consumers). Rather, it’s because low standards for patents — especially in software — have allowed Microsoft to amass a huge number of patents on routine characteristics of mobile operating systems. Microsoft’s patent arsenal has become so huge that it’s effectively impossible to create a mobile operating system without infringing some of them. And so Microsoft can demand that smaller, more innovative companies pay them off.

… In effect, the patent system is acting as an innovation tax, transferring wealth from companies that are creating successful technologies today to companies that acquired a lot of patents a decade ago.

A more fundamental change would be to offer patents of varying length, say 3, 7, and 20 years with the understanding that 3 year patents will be approved quickly but 20 year patents will be required to leap a high hurdle on non-obviousness, prior art and so forth. See my paper Patent Theory versus Patent Law.

My video on patents is a quick and fun introduction.

Since I was disappointed by Tabbarok yesterday, I wanted to highlight a good idea here for reducing patent abuse by adding tiers of duration.

In addition to reforming terms it'd be nice if all of our IP laws included a set annual tax of some sort to discourage maintaining monopoly status for huge portfolios which aren't actively being used.
Washington, DC

Submitted by: (via Cute Overload)

Caktus Consulting Group: Django Logging Configuration: How the Default Settings Interfere with Yours
Tuesday January 27th, 2015 at 11:57 AM

My colleague Vinod recently found the answer on Stack Overflow to something that's been bugging me for a long time - why do my Django logging configurations so often not do what I think they should?

The kernel of the explanation is in this Stack Overflow answer by jcotton; kudoes to jcotton for the answer: before processing your settings, Django establishes a default configuration for Python's logging system, but you can't override it the way you would think, because disable_existing_loggers doesn't work quite the way the Django documentation implies.

That made me think that I could set disable_existing_loggers to True (or leave it out) and Django's previously established default configuration would have no effect.

Unfortunately, that's not what happens. The disable_existing_loggers flag only does literally what it says: it disables the existing loggers, which is different from deleting them. The result is that they stay in place, they don't log any messages, but they also don't propagate any messages to any other loggers that might otherwise have logged them, regardless of whether they're configured to do so.

Because Django installs several django loggers, the result is that unless you happened to have specified your own configuration for each of them (replacing Django's default loggers), you have some hidden loggers possibly blocking what you expect to happen.

For example - when I wasn't sure what was going on in a Django project, sometimes I'd try just adding a root logger, to the console or to a file, so I could see everything. I didn't know that the default Django loggers were blocking most log messages from Django itself from ever reaching the root logger, and I would get very frustrated trying to see what was wrong with my logging configuration. In fact, my own logging configuration was probably fine; it was just being blocked by a hidden, overriding configuration I didn't know about.

The most fool-proof solution is to disable Django's own log configuration mechanism by setting LOGGING_CONFIG to None, then setting the log configuration explicitly ourselves using the Python logging APIs. There's an example above.

The Python documentation is more accurate: "disable_existing_loggers – If specified as False, loggers which exist when this call is made are left enabled. The default is True because this enables old behavior in a backward- compatible way. This behavior is to disable any existing loggers unless they or their ancestors are explicitly named in the logging configuration."

In other words, disable_existing_loggers does literally what it says: it leaves existing loggers in place, it just changes them to disabled.

Unfortunately, Python doesn't seem to document exactly what it means for a logger to be disabled, or even how to do it. The code seems to set a disabled attribute on the logger object. The effect is to stop the logger from calling any of its handlers on a log event. An additional effect of not calling any handlers is to also block propagation of the event to any parent loggers.

Status of the problem

There's been some recent discussion on the developers' list about at least improving the documentation, with a core developer offering to review anything submitted. And that's where things stand.

Seriously, they're basically all the same song.

Submitted by: (via Sir Mashalot)